skip to main | skip to sidebar

Mr Pipes wants to see You... 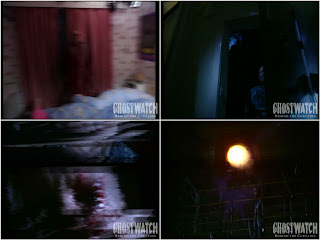 TV is an excellent scapegoat for parents who are too lazy or incompetent to keep their children in line – so when those kids do something stupid, lack of parental communication never seems to enter the public’s minds.
Soon after the BBC showed the one-off drama Ghostwatch on Halloween in 1992, livid views complained about how their kids couldn’t sleep for weeks after the broadcast without having horrible nightmares. Others felt that they were duped into thinking that this fictional paranormal investigation was real.
The peak of the Ghostwatch controversy came when a mentally-handicapped teenager hung himself days after the show was broadcast, with his parents claiming that he was traumatised by programme.
The Beeb has never repeated the show.
With a documentary on this controversial TV drama in the works, why not take examine what all the fuss was about?
Ghostwatch centres on the disturbing goings-on in a terraced house in the suburb of Northolt. The Early family claim that their home is being terrorised by a hideous ghost that they call “Pipes”. TV legends Michael Parkinson and Mike “Smithy” Smith host the “live” studio broadcast, with Craig Charles and the unnervingly hot Sarah Greene at the scene of the haunting.
What fooled many viewers who missed the announcement and the writer’s credit at the beginning of the show was its authenticity. Using established presenters adds to the sense of reality – as does the fact that very little happens in the first half an hour or so.
When things start to happen, though, the sherbet really hits the fan. Squealing cats, pictures flying off walls, demonic voices and fleeting glimpses of a frightening figure will have you looking twice just to make sure you didn’t see something lurking outside the window.
Various callers give a taste of the house’s dark history, leaving you in no doubt that old Mr Pipes is one evil piece of work indeed.
What makes Ghostwatch all the more disturbing is fact that you rarely see Mr Pipes – the scares come from what you think you just saw. Even though it’s not as scary as it was the first time around, Ghostwatch will leave many viewers seriously creeped-out for a good while after the end credits have rolled. In fact, my younger sister made me stay in the room with her for a good half hour afterwards.

Scaring your siblings is fun.
You can find Ghostwatch on via most online retailers, and its well worth sticking into your DVD player.
To find out more about Ghostwatch: Behind the Curtains, go to:
youtube.com/user/GhostwatchBtC
ghostwatchbtc.blogspot.com
Posted by Ger Jones at 16:21

You can get this time back, you know...

Ger Jones
I am 29 years of age and live in a country called Wales. "Wales" means "there's no fucking way I'm living there" in Anglo-Saxon.